A big thanks goes out to our 2016 sponsors: The Royal Coachman and The Works 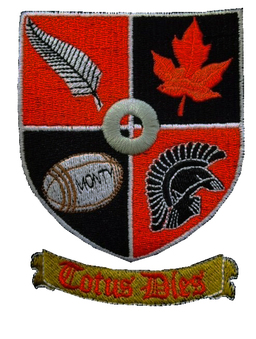 Crest of the Waterdown Boys' Rugby Club
In 2004 Zach Beers approached Mr. Prangley with the idea to start a rugby team at Waterdown District High School. By 2005, "The Originals" were formed with the support of Simon Lewis, Braden McLeary, Matt Stajov, Andrew Hyde, and Mr. Tidridge. Both boys and girls made up the original team at Waterdown before they were split into separate programs for the 2006 season (Mr. McKenzie and Mr. Thomas taking over as coaches for the girls' team). The Originals trained the entire 2004-5 season to play one match against Pearson High School - a game in which Waterdown came away victorious.

The 2006 season, Waterdown's first in HWDSB League, was a huge success for the team. Finishing fourth in City Finals, the Waterdown Boys' Rugby Club announced its presence to the Board. This success was followed the next year with the team declaring itself part of the "True Sport" movement, a pledge that promoted the skills and values of sport.  2006 was also the year local restaurant, The Royal Coachman, announced its sponsorship of the team - a relationship that continues to this day (a 2008 special edition jersey now hangs in the Royal Coachman).  The following year saw the addition of Monty Heald to the Coaching Staff.

On February 13th, 2008, the Club were given the distinct honour of being marshals, as well as forming the flag party, for the vice-regal visit of The Honourable David C. Onley, Lieutenant Governor of Ontario. The Club served His Honour with class and dignity. As a mark of honour, the 2008 jerseys had a mace embroidered on them in gold (called the "mustard stain" by the boys").

Thanks to the efforts of Eddie Enriquez and Paul Bousfield, the Club received a sizable donation from the Ministry of Education in 2009. This grant allowed the Club to offer more support to its members, as well as ensure that boys participated in some out-of-board tournaments. 2009 also saw the addition of Dave Burnett to the coaching staff - Dave eventually became Head Coach in 2010.
A strong collection of young men came to together in 2012 to deliver some extraordinary play during some epic games (a match against MacNab during a snow/rain storm immediately comes to mind). Finishing the year ranked fourth in the city, the WDHS Club was celebrated by the lieutenant governor of Ontario. At a special assembly convened for the boys the following message was read to the school:

The Honourable David C. Onley, Lieutenant Governor of Ontario (a great friend of WDHS) heard about the extra-ordinary group of young men and their coaches involved with the WDHS Boys’ Rugby Club.
WDHS Rugby Statement of Principles

WDHS Rugby in the News

Important Dates & Times for the 2016 Season:

"And who is that?" the boy pointed out to the field of chaos.
"Oh him," his father smiled, "that is actually the real Zeus, but the boys here call him by a different name. Here they call him 'Tom.'"

It was a great victory for Waterdown yesterday Warriors - catapulting the team into City Finals on May 16th.
​ 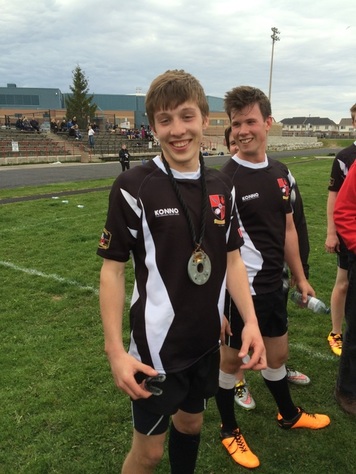 Yesterday was the season opener for the Boys' Rugby Club, and in the immortal words of The Donald it was "Yuge." In what was for some their first rugby match EVER, the boys threw themselves at the top team in Hamilton with everything they had. Nick Bell charged into the game, at times leaping around like a deranged Wildebeest, Saltfleet players falling left and right. Ben Patterson smiled as he tore across the pitch, eyes locked on the ball. The boys came together like a well-oiled machine – how far they had come since that one time Tom Coville brought a soccer ball to practice . . . In years past Waterdown would go down in defeat against Saltfeet, posting losses that could only be called catastrophic. Yesterday they were only 3 heartbreaking points from victory – it was brilliant.

One of the great highlights of yesterday's match was witnessing Mike Hennessey leave everything out on the field. It was Mike that scored our first try of the season, a try against Saltfleet no less. As I watched him dash across the pitch, earning the first BOA from Captain Dylan Dukeshire, I could not help but say to myself "I'm really glad I passed that guy in Canadian History." Well done Mike.
2016 Season Schedule Announced

In an ideal situation, the R-3 pressure formed mouthguard is the best for individuals playing sports like rugby, however, even a One Laminate mouthguard can be useful (and definately way better than boil'n'bites and other non- custom mouthguards).

Take a look at the file attached to this message that details  mouthguards aldente is able to make with the regular fee, and then the reduced fee for our team.  There is information about the different types of mouthguards on this sheet.  Please feel free to print them out.

If you want one of these mouthguards, players should call or email aldente (click on their logo at the top of this website) to make the appointments. Make sure to let them know you are a member of the rugby team so that they know to apply the appropriate discount.

More information (including the address) of Joe Sams Park can be found here.