The Souharissen Natural Area
Waterdown, Ontario
On the Treaty territory of the Mississaugas of the Credit, as well as lands used by the Neutral Nation, Haudenosaunee Confederacy and Wendat Confederacy.

A history in pictures:

“May today mark the renewal of those pledges of peace and friendship made over 200 years ago . . . May this mark the beginning of a new partnership between the people of this region and our First Nation.” 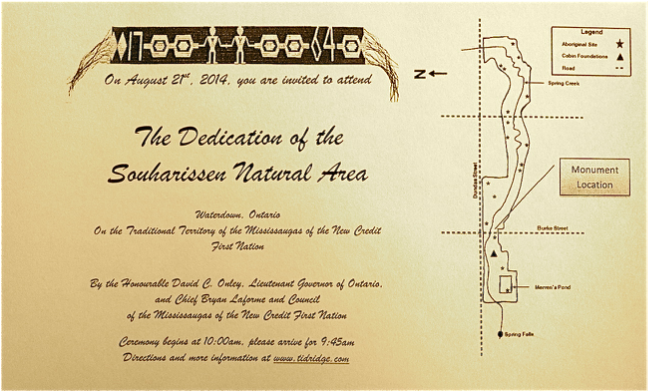 Click here for Official Press Release
In the spirit of the 250th anniversary of the Treaty of Niagara:
The Souharissen Natural Area covers 55 acres in the Village of Waterdown, and is the result of years of work following the discovery of 104 Indigenous archeological sites in the Waterdown Bay Development Area in 2005. Councillor Judi Partridge has championed this project since its inception, providing unflagging support.
See some of the sites here
Letter from the Chief and Council

Pictures from the Dedication on August 21st, 2014 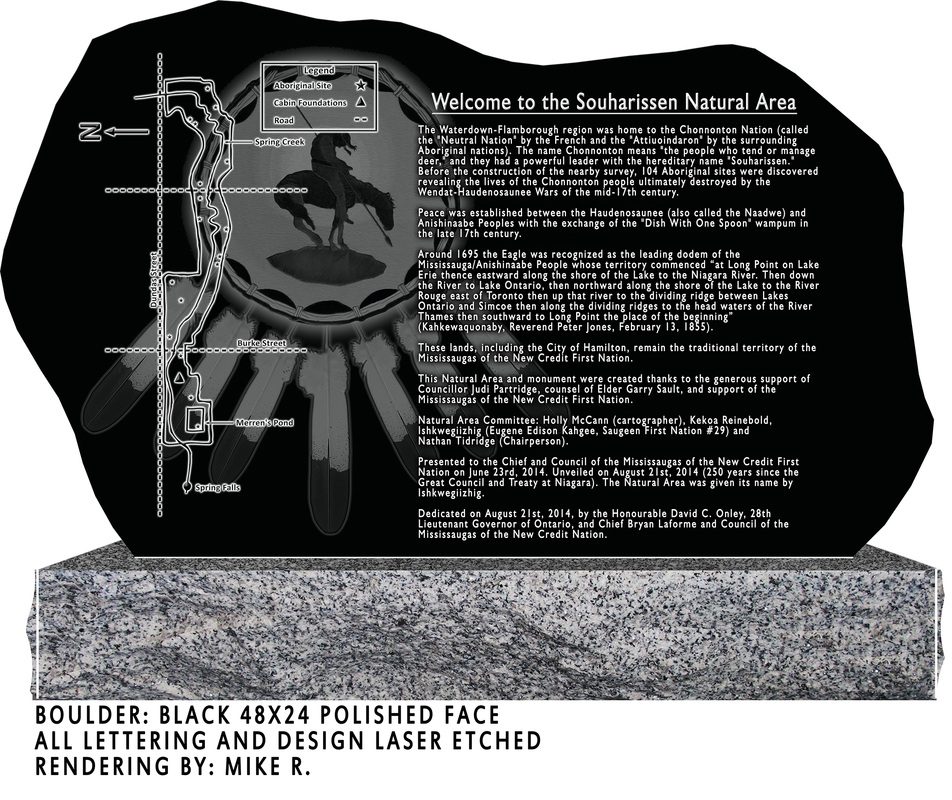 The Souharissen Natural Area Canoe Garden (Wiigwaasi-Jiimaan) was inspired by Carolyn King of the Mississaugas of the New Credit Nation, the host nation of the Toronto 2015 Pan Am/Parapan Am Games. This canoe, one of twenty, links the New Credit Reserve to their traditional territory and is filled with Indigenous medicine presented by September Sault of the Mississaugas of the New Credit and planted by students from Waterdown District High School. On the day that students traveled to New Credit Reserve to receive the plants for the garden, a bag of reserve soil was also presented to Nathan Tidridge -- a violation of the Indian Act, Section 93, (a)(i) -- to mix into the Souharissen Canoe Garden to highlight ongoing violations of the Treaty relationship.

The Souharissen Canoe Garden is also a Heart Garden, part of a network established by the Truth and Reconciliation Commission (the final report of the TRC was delivered on June 2nd, 2015), and was dedicated by the community, including Councillor Judi Partridge and Trustee Penny Deathe, on May 29th, 2015.

Gifted by Rick W. Hill, a medallion from the Haudenosaunee Confederacy (honouring that this land is also their traditional territory) is also contained in its soil.

On National Indigenous People's Day (June 21st, 2021) the Souharissen Canoe Garden was visited by the Honourable Elizabeth Dowdeswell, 29th Lieutenant Governor of Ontario. Joined by members of the Mississaugas of the Credit, as well as other dignitaries, the Lieutenant Governor top-dressed the garden, as well as marked the canoe with the Moccasin Identifier. The Canoe Garden was filled with 215 knitted orange flowers created by Waterdown's Sabine Atkins (raising over $3600 for the Indian Residential School Survivors Society) to commemorate the recent discovery of unmarked graves as the site of Kamloops' Residential School.
Community Canoe Garden Network Map 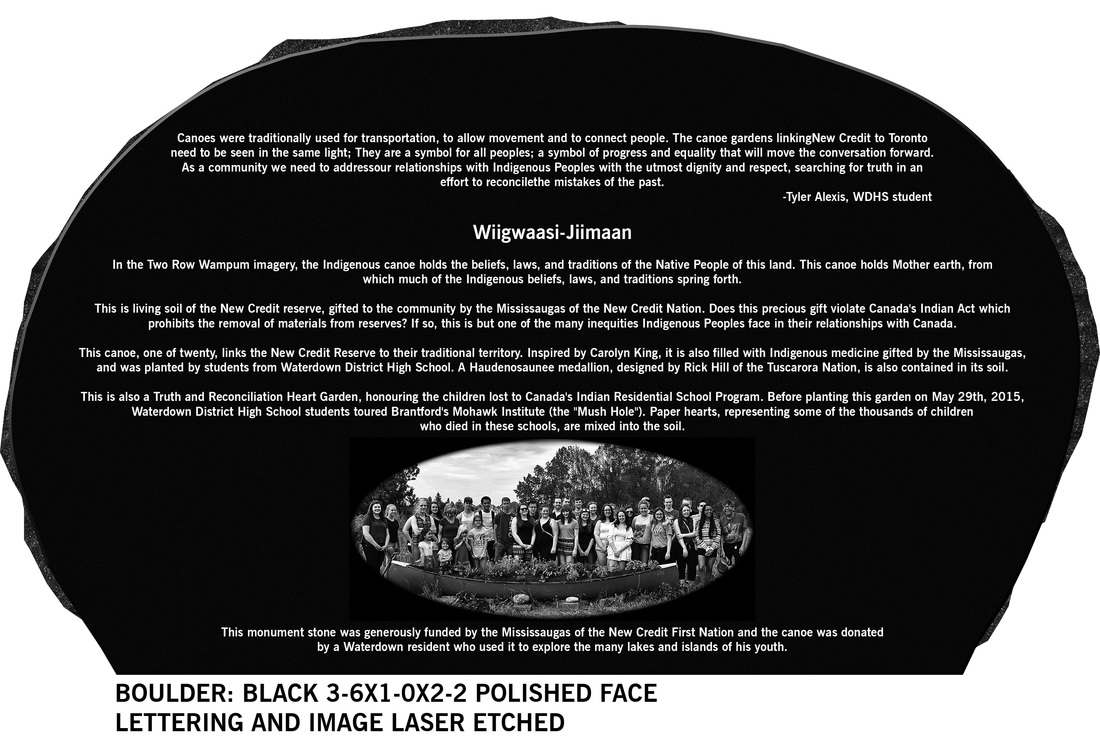 On July 8th, 2020, seven bat houses (created by Grade 4 students from Allan A. Greenleaf PS and Indigenous Studies students from Waterdown District High School working with Eugene and Cindy Kahgee) were installed in the Souharissen Natural Area. Dotting the landscape from Shki Maajtaang to just past the Canoe Garden, each bat house is inspired by one of the seven Grandfather Teachings gifted by Mr. Kahgee.

The bat houses were created collaboratively during a series of visits between students from Allan Greenleaf and Waterdown District High School over the Spring of 2019. In mixed groups, students worked together to build and decorate their bat houses (including researching the teaching that their group was focussed around).